Physical Properties of Tyre Walls, The University of South Australia 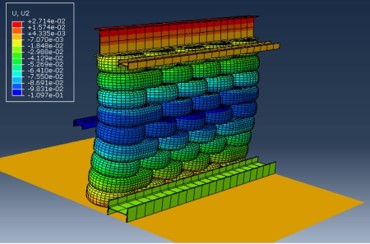 In 2017, Dr Freney secured funding of over $100,000 from Tyre Stewardship Australia to do a study of tyre walls in terms of their strength and resilience as retaining walls in Earthship homes, especially regarding their behaviour during an earthquake. Tyre Stewardship Australia is a government agency with the aim of dealing with the 55 million waste car tyres Australians produce every year - in an ecological and sustainable way!

55 thousand Earthship homes could be built in Australia every year with the 55 million waste tyres that we Aussies generate each year!

The research is underway at The University of South Australia by a team of structural engineers. The video above shows some terrific world-class research by the team* of just how resilient tyre walls are!

This wall is built in the usual Earthship way - the tyres are lined with cardboard, filled with earth, and then the earth is compacted until the rims of the tyre swell up.

Any "normal" wall would crack and be permanently damaged... not this wall!

The testing indicates that Earthships would perform well in earthquakes and many of the engineering methods used in Earthships to reinforce the walls could be scaled back due to the inherent strength and resilience of the tyre walls.

Martin Freney's PhD thesis is titled Earthship Architecture: post occupancy evaluation, thermal performance and life cycle assessment. (2014)
It compares the Earthship's curious features such as the off-grid systems, tyre walls and the greenhouse (sun-room) to other types of homes in terms of sustainability. Essentially the research questions was:

How "green" is the Earthship compared to other types of housing? And why?

Three main issues were studied:
The main findings were:

The graph above shows the indoor temperature inside six Earthships in Taos, New Mexico USA during the winter week with the lowest temperature (circled in red).  The bold grey line is the outdoor temperature and you can see it is sub-zero most of the time, day and night. However, all the Earthships stay well above 10 degrees C, and many of the modern designs (#1, #2, #3) remained above 16C. Earthship #1 stayed above 18C! This is with NO HEATER! Only Earthship #6 had a heater which you can see turning on and off on the first two days of the week. The dotted red line is the sunshine... day 2 (22/12/2011) was a cloudy day, and it is interesting to note how all the Earthships behave - they all lose temperature... but some more than others! Design AND how you "sail" your Earthship are key factors.
Click here to download a PDF file of Freney's PhD thesis titled "Earthship Architecture: post occupancy evaluation, thermal performance and life cycle assessment".